In addition to the changes to the research view and migration to MarkLight, I've been able to improve the Planet View.  The major improvement is the Tech view which shows the building inputs, outputs and construction needs of individual buildings without having to go into R&D to get it: 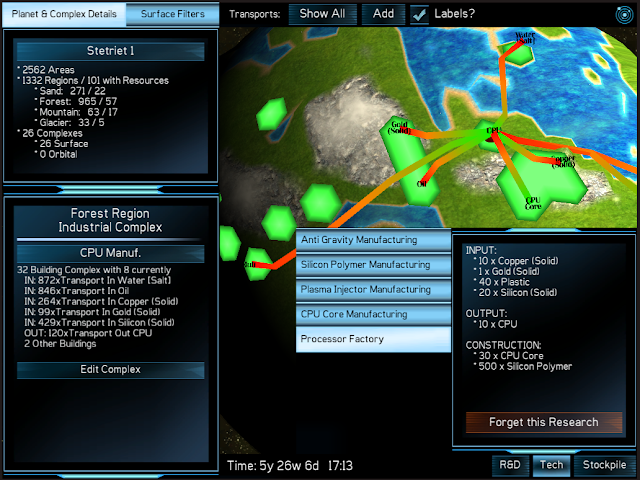 Most of last week was consumed by a migration from one UX version to another.  When will I ever learn to wait until version x.3 of anything before migrating?  Fortunately, the developer was available on Slack and we were able to have real-time support chat conversations.  Still, ran into far too many bugs.

Anyway, here is the updated Research View.  It now incorporates all of the suggested Play Test changes that were identified about 2 weeks ago. 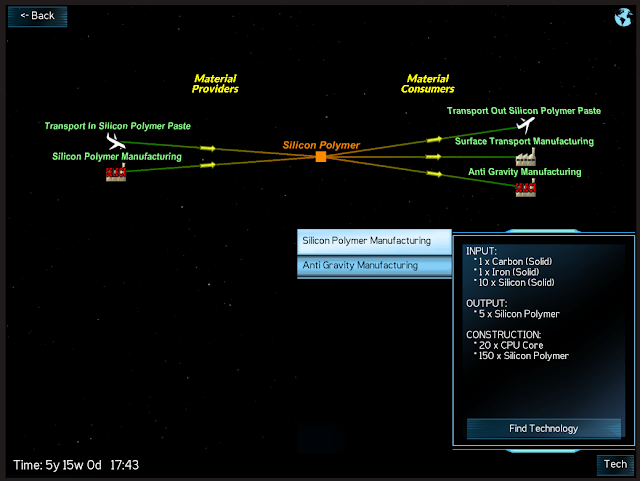 
It was pointed out that it would be really nice to be able to remember/see the formulas for the various factories.  So I have added the tech view.  Which is also available on the Planet and Complex views, shows up to 9 building formulas, showing the Inputs, Outputs and Construction needs for each building type.

Selecting/Unselecting a Building Type is done by right-clicking the building in any research view.

Tech in the Research View allows you to also quickly find the research to show a graphical view or to unselect it.  Whereas, in the Complex and Planet views, there is a "Forget Button" to remove it from the list.

Last Friday, I took the game to the Calgary Game Developers work session and got some great feedback from 3 of the developers.  I've incorporated most of the suggests, except one, which I will defer to later on.  That one is related to how to view the tech tree, and I will add it when I revise the tech tree later in development.

As a result of the feedback I have revised the planetary view to include labels over the vertices so that at a glance you can see the primary output of the complex.  Zoomed in, it looks like this: 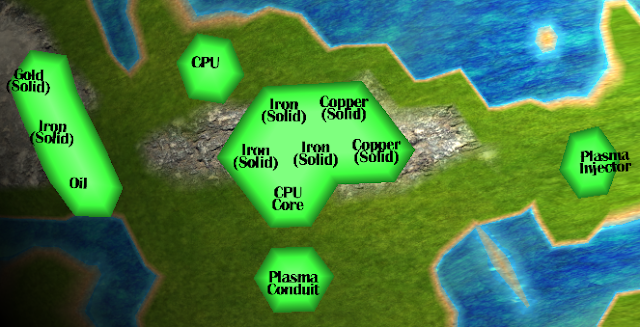 Since each complex typically routes in multiple inputs and, generally, produces a single output, it made sense to identify the material that the complex produced, and this made the view much descriptive.  Later on, I'll replace this text with an icon, but for now, text is good enough.

I went on with the changes and now show only the labels for the inputs and outputs, and revised the colouring on the connector lines on a per complex basis.  The lines show RED (start) to GREEN (end).  These lines are also temporary, I'll replacement with arrows or particles later in the development.  Particles are preferred because then I can use the same icons describing the outputs as particle textures.

In the image below, I show the before and after labels view: 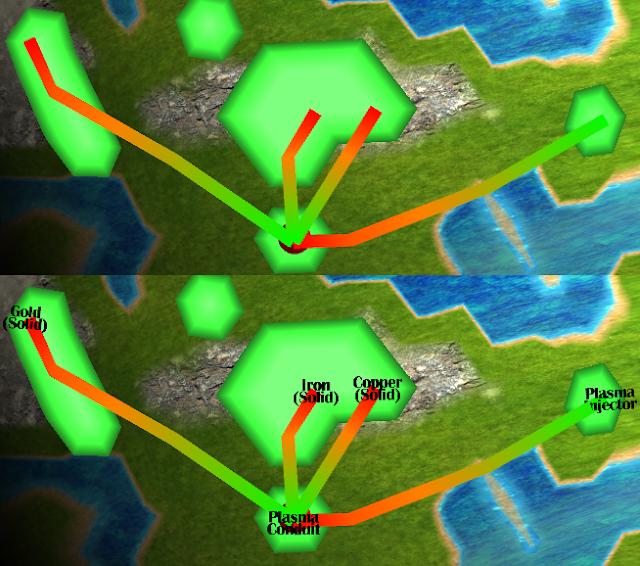 It should be clear that the formula for a Plasma Conduit is Gold, Iron, Copper IN and the output goes to Plasma Injector manufacturing.