I've gone back to my original planet generator and with the help of $20 asset, come up with the following revised planet.  If you remember planets from last year, no way did they look this good. 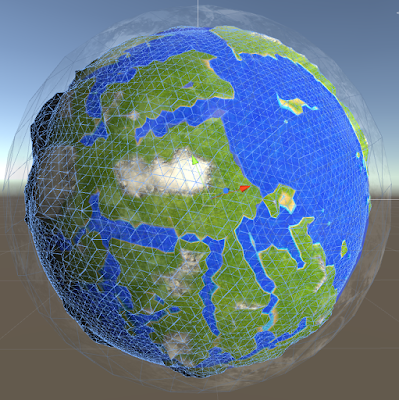 I've been thinking a little bit about the story, and have decided that at least conceptually, the player home planet was attacked years ago and it's inhabitants spread throughout the galaxy.  The player wakes up on a planet and is able to access the technology to help the rest of the inhabitants who are here.  How and why I'm not sure yet.

As for the game play, the game contains 4 levels of abstraction, starting with the most drilled in:
A COMPLEX is the lowest level area and consist of a small town/city of interconnected buildings.  Players simply plop down buildings of various types and the game auto interconnects them.  Player isn't required to build sewers, roads, train lines, etc.  If it's there it's auto-connected.

Therefore, each complex has an interior working arrangement with complex-level inputs and outputs.

Complexes be interconnected, moving materials around, but a planet can also have orbital points, enabling interconnectivity at a solar system level.

The moment the player zooms out to the SOLAR SYSTEM level the game aggregates the planet, and simulation on a planet scale doesn't have to be resimulated within the system.

Same holds true for the GALAXY, and it aggregates detail for the solar system.